Thank you so much for checking out our submission to the 2020 Folklore Game Jam! We did as much work as we could to get it ready in time for the submission, but it's still not quite where we'd like it. Look out for future updates where we'll jazz up the rulebook, add new cards, and update the existing ones with some flavor text.

If you have any questions or feedback, feel free to reach out! I'm active on Twitter but you can also email me at goatwrighter@gmail.com.

In It Was Bigfoot, you play a cryptozoologist investigating Bigfoot sightings with the hopes of being the first to find them. But competition is stiff - your fellow cryptos are searching just as hard as you are, and they're willing to throw wrenches into your research just to get the upper hand. To win, you'll have to beat them at their own game while managing your investigations. Whatever it takes to be recognized by the scientific community, right?

There are four types of cards in It Was Bigfoot: Sightings, Evidence, Hoaxes and Leads.

At the start of a game, each crypto draws five cards. You may determine who goes first randomly, though it's recommended you let the player with the best Bigfoot story go first - afterwards, turns move clockwise.

During your turn, you draw a new card and have one action to make. This can be either placing a Sighting down with its first Evidence, placing additional Evidence or Hoaxes, using a Lead, or making a callout. Evidence or Hoaxes that've been down for two turns may be flipped over without using an action.

You keep Sightings you've successfully completed on your side of the table, and return all cards to a discard pile after they've been used. If all the cards in the deck have been used and the game isn't over, you can shuffle the discard pile and continue with the new deck.

This continues on until the first person has earned a total of 15 points from Sightings to win the game! 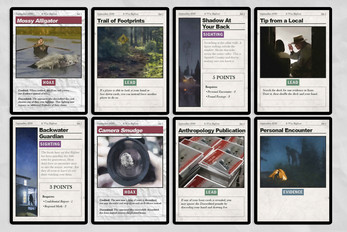